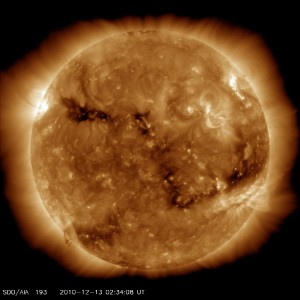 This article is part of a series.
Please read Transformation through Knowledge and How I neutralized the New World Order

The Sun is going through some changes. Solar activity is at its strongest point in 8,000 years. I’ll avoid the theories of why this is happening  and direct you to some fun resources for keeping an eye on solar activity, which is supposed to be very active from now through the next few years.

Coronal Mass Ejections (CMEs) or Solar Flares have been picking up in the last few months. This affects our magnetosphere, our planet, and our bodies.

Magnestopshere: Our magnetic field does a good job of protecting us from flares. But the sun’s most active areas have not been pointed directly at us in the past. These intense areas will be facing us over the next few years. When the magnetosphere gets a hit, the intensity can range from mild (C class) to medium (M class) to intense (X class). It takes 72-76 hours for the effects of a solar flare to reach us.

Pole shift: I don’t think this is going to happen. Some say we are overdue, some say the evolution of consciousness on the planet has stopped this event from occurring. This is a doomsday scenario and I don’t subscribe to it. There is plenty of speculation on the internet about pole shifts if you want to investigate.

David Wilcock has a great presentation on YouTube which overviews the current changes in our solar system. These bullet points are a few of his observations regarding the solar system in the last 20 years.

Global Warming is a natural phenomenon. From a higher perscpective, it is the collapse of the astral planes. According to the observations above, it’s occurring in our entire solar system making planets brighter, hotter and more magnetic. This also means higher frequencies, which is something I’ll discuss in Area Four this week.

A side note on Global Warming being a natural event: this does not mean you should abandon your conservation efforts. CO2 Emissions are still a problem for our air quality and draining of our natural resources. Environmentalism is still very important. We must learn to care for our planet and eliminate all the useless items and activities that choke her air, water, and soil. The problem with Global Warming is that it is being used by the NOW team as a tactic to set up international carbon point exchanges and standards that will push impoverished nations into further slavery. Investigate it if you like, neutralize the emotion, and get on with creating the new earth.

Here are a few items that coordinate with the big date and the year 2012 you have been hearing about.

Next up in this series: Area Three: Galactic drama and extraterrestrials