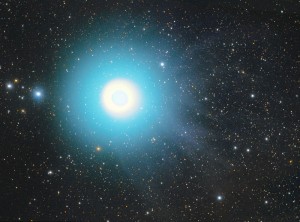 Humans love a good story as well as a perceivable sign of promise, and the magic time of comets, stars and end of days is here at last. But this window of time is not about seeing these symbols in the external world. These long-prophesized symbols reveal the beauty, love and divinity of our internal world; they are a mirror reflecting the arrival of crystalline consciousness within all of humanity.

My meeting with a Sirian

A being had been presenting to me for a while, but silently and with a mask-like face. I received a silent tour of his lightship, which was a blue-indigo color. A few days later he began answering my questions.

He’s from the Sirian star system. We have been working together in his ship during my dreamtime (he jokingly called it “the office”), and our journeys are about to become very intertwined. I requested that he give me undeniable proof that he had my and humanity’s highest interests in mind and heart. He began a healing on me that took away deeply embedded karmic suffering and physical embodiments of that pain. Afterward, I took a strong Epsom salt bath and went into child-like sleep. It was unmistakable proof of benevolence. Nothing fluffy, very to-the-point.

So why the mask?

My Sirian knows I am deeply creative, and that I love beautiful symbolism. The Hopi prophecy says, “When the Blue Star Kachina makes its appearance in the heavens, the Fifth World will emerge”. The Hopi name for the star Sirius is “Blue Star Kachina.” It arrives when the Saquasohuh (Blue Star) Kachina dances in the plaza and removes his mask.

My Sirian is wearing a mask to get my attention, to show me the symbolic meaning of the El Enin/Quetzalcoatl/Blue Kachina prophesies.  He says he will be lifting the mask during this time of the “Apocalypse”, which literally means “lifting of the veil.” I fully realize that he will show me the true meaning of no separation and unity consciousness.

When his mask is lifted, it will be like gazing at a mirror; not the physical me, but the divinity of creation reflected in another form. It will be a profound expression of unconditional love, unity consciousness and honor. Loving oneself as a microcosm of loving all that is. All intertwined, multidimensional, and absolute zero point in its vast possibility.

The giant crystalline-consciousness stimulator Comet El Enin returned for several passes in 2011, and she burns in a perceivable blue color. Her multidimensional energy is very strong. She is another symbol of the return of Christ (crystalline) consciousness. Forget the doom tales of destruction and chaos; that is not what this is about. Cleansing? Yes. Balancing? You bet. Magnetics and repolarization? Absolutely. The end of the world? Well, the end of an old world – one that we don’t collectively desire any longer.

Throughout history, ancient civilizations such as the Mayans, Egyptians, Aztecs and Sumerians have referred to the feathered serpent sky-god who would return to instruct humanity. According to the Mayan calendar, we are now in the time his anticipated return.

Just as the Blue Kachina and El Enin are symbolic markers for this window, Quetzalcoatl is also a symbol of the apocalypse (lifting of the veil). These are divine metaphors for activation of our dormant DNA, the collective rise/return of our kundalini, and the revelation of our divine HUman (God-man) nature, currently expressed as creator incarnate on this planet.

Ultimately, it’s the return of YOU – not a star, a comet or a feathered serpent

The REmembering of all that we are, and revelation of our divine interconnection with the Universe is about to unfold. For the awakened, it will be a remarkable window for receiving deep activations, full self-actualization and higher dimensional frequencies which will transform many of us as we fully engage our ascension process.

We’ve entered the long-awaited photon belt of consciousness. This cosmic uber-blast of higher frequencies coming in through the center of our galaxy is raising the frequency of the planet at a much faster rate than years past. Just as we have aches and pains as we integrate the activations, so Mother Earth must integrate and balance these intense rays of evolutionary light. Be steadfast in your partnership with her; connect with her, send her love and light, and pay attention to your thoughts, actions and awareness as events unfold in September/October.

How much love and light can you handle? This Universe is built on the frequencies of love and light. The foreign energies that have caused so many imbalances are not even from this Universe, and they are quickly being dissolved. The true nature of our Universe is zooming through us, cleansing all that is not its own vibration out of our way so that evolution may occur.

How much of these higher frequencies are you willing to integrate so you may see your own true nature? What will be revealed for you as the mask is lifted on your own journey? Will you see yourself in all things, all beings, the true intergalactic essence of unconditional love and light? The New Earth will be created as fast as we are able to maintain these higher frequencies within the collective consciousness. This means taking responsibility for your own transformation and integrating these powerful waves of unconditional love into your lifestream.

The light intelligence of love available during these passages of blue stars, feathered serpents, and divine cosmic integrity are journey-altering. The soil is extremely fertile now. Every thought, action and intention of consciousness will grow – fearful or divine. Consciously allow these energies to lift the veil on your true self, and reveal the new crystalline consciousness within your own heart.

2 comments on “The Blue Kachina: how much can you handle?”