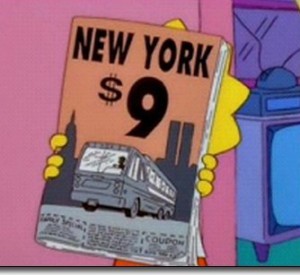 A few weeks ago, the internet was buzzing about a Simpsons episode which aired in 1997, where Lisa holds up a magazine that blatantly has a big 911 and New York on the cover. Twin Towers, New York, and the date. Weird, huh? The buzz was about an episode from this spring where a clock displays 11/6 and a big 10 after a nuclear explosion. If there was forewarning before, would something happen on 11/6/10? Fortunately that scenario did not occur, and it’s anyone’s guess as to what the clock did or did not mean. But the 911 reference, 5 years prior to a major event, is disturbing.

The quote I used last week in my letter to Iran which speaks of crumbling high rises and rubble, was written (and copyrighted, so you can verify) as part of the Magic Pager Messages in 1999 – 2 years before 9/11.  After the World Trade Centers fell, which changed the course of my life path, I re-discovered the quote when I began writing the outline of my first novel. I had heard of science fiction writers, musicians, playwrights and various artists who predicted future events in their work. There are many examples of this synchronicity, but it’s a little creepy when it happens to you personally.

When I wrote The Creator State I had no idea what “using intention” or the shift movement were about. I hadn’t even heard of them at that point. I glossed over some texts on the Field to strengthen my novel’s premise that artists could change reality. I read about a Transcendental Meditation group which decreased violent crime in Washington DC; it seemed that a large enough group of people tapping the field could affect the area around them.  I wrote with that little bit of information as backup for my premise, and had my characters create change by simultaneously intending a peaceful world.

Years later, my creative dreams are becoming reality. Last week I participated in a global intention to create peace. I’m an active participant in the Shift movement, which is an effort to awaken 10% of the population in order to evolve along with the planet to a more peaceful and balanced place. Just like what I’ve been writing about as fiction since ’99.

So what is happening here?  Why are so many artists connected to precognitive information, and what does it mean?

Whether the information received is for the public or your own path, it makes sense if you consider the inner workings of the Field. Quantum physics has shown us the collective consciousness, where all thoughts, past and present, interact and create our reality. If the Zero Point Field contains all knowledge, then tapping it through an open portal such as art or meditation would allow access to the intentions of others. Like a clairvoyant channeling information, an artist can create a story, image, song, performance that reflects a fragment of possibility – the intention of the future.

The future is never set. We must remember that, especially in these challenging days. Our collective reality can be altered – collectively. It is a game of numbers. Enough people setting an intention or believing in a certain reality and presto – it happens. You get what you think is true. This may have been what happened with 9/11, and other major events that have been “predicted” unknowingly through art. The intentions are out there in the Field. We funnel them into our work when we follow our inspiration and do what the flow wants us to do.

A side note for insider knowledge: I’m not including any artist’s deliberate use of symbols and forewarnings of planned negative events. That is done on purpose, no Field needed. Oh – and shame on you for knowing and not telling people ahead of time.

Creative minds might also consider that the collective knowledge of the Field doesn’t include just this planet, but all knowledge. This spiritual aspect of creativity is beautiful to me. The universe utilizes artists to send insights and glimpses of truth through their work. Little bits of knowledge, codes, connections are sent to the population through our creative projects.

As artists, all we have to do is create openly and genuinely in order to receive these transmissions.   Non-attachment is key: pushing or manipulating seems to crush the flow. Trust the inspiration (no matter how strange) and let the creation do its work.

How to Find your Creator State my free ebook

The Creator State by Sandra Walter